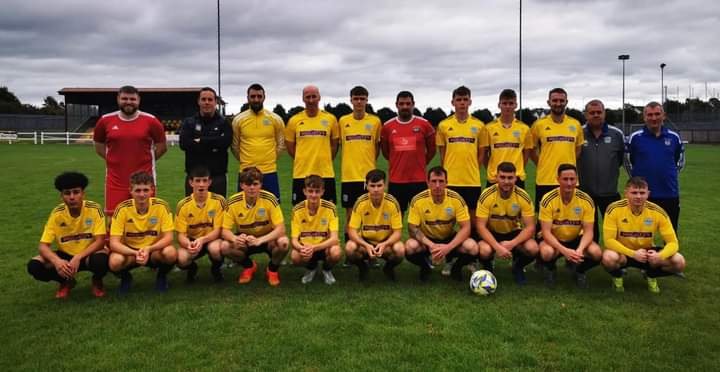 Roscommon and District League Round Up
The FAI Junior Cup took centre stage last Sunday and as expected it was a day of mixed fortunes for teams from the Roscommon and District League.
St Johns Athletic travelled to the Sligo Super League side Ballisodare Town and came away with an impressive 4 – 1 win following a good game of football. The Lecarrow side were quickly into their stride and Simon Leonard and two from Aaron Flaherty gave them a 3 – 0 lead after thirty minutes of play. The home side pulled a goal back before the break but any hopes of a comeback were quickly dashed when Christopher Hurley added a fourth for the winners.

Ballaghaderreen faced a tough task when they played a strong Castlebar Celtic side at Ballaghaderreen. The home side took an early lead through Ben Feeley and were still ahead after thirty five minutes. However the visitors gradually took control and finished 5 – 2 winners. Keelin Feeley added a second for the home side.

Boyle Celtic were comfortable 8 – 1 winners over the Sligo side Coolaney United. Louis Garvin and Callum Andrews scored three each and Joseph Walsh and Darren Foley added one each for the winners.

Division 1 side Cloonfad travelled to the Mayo Super League side Manulla United. While the home side were3 – 1 ahead just after half time a very young Cloonfad United side never gave up and eventually lost on a 4 – 2 score line. Jack Reinhardt and Darren Keadin had Cloonfad United just a goal behind with five left to play but the home side scored a fourth from the penalty spot to seal a win.
Moore United travelled to the Mayo Premier Division side Conn Rangers and after a good comeback they were eventually beaten 4 – 2. The home side went into a 3 – 0 lead with missed chances costing Moore dearly. Eventually they did make a comeback and goals from David Griffin and Charles Nevin made it 3 – 2.Moore had a shot come back off the cross bar before the home side added a fourth near the end.
Premier side Ballinasloe Town beat Kiltimagh / Knock United 5 -2 at Ballinasloe. The home side were the better team but found it difficult to shake off the Mayo Premier Division side. Young Jordan Carr scored two and Josh Mc Carthy Ryan and Burke one each before and a Garry Canavan special secured Ballinasloe Town’s a place in the second round

In the Premier Division both Kilkerrin United and Castlerea Celtic picked up their first point of the season when they drew 2 -2 at Kilkerrin in an entertaining game of football.
Castlerea Celtic took the lead with ten minutes played through Brendan Pacey but Oisin Keane on his debut levelled the game within a minute. Five minutes before half time Castlerea Celtic restored their advantage when Brendan Pacey added his second but Damien Mahon scored for the home side with a header following a corner kick. Both teams had chances to win the game in an entertaining second half but had to settle for a draw.
The Castleplunket side C P Ajax had an impressive 2 – 0 win away to Skyvalley Rovers. With the Hanley and Boyle brothers in top form C P always seemed like taking the three points. With ten played a Paul Mee corner kick was volleyed to the Skyvalley net and just after the restart Paul Mee scored s spectacular goal from outside the home penalty area.
In Division 1 Dysart go top of the Division following a 5- 4 win over Ballymoe at Dysart. The home side were 3 – 0 down at half time but a great second half resulted in an impressive win. James Goose and Conor Dolan scored two each and Peter Cummins one for the winners. David Swift scored two and Damien Goggins and Mark Kilcommins one each for the Ballymoe side.
Dunmore Town had their first win of the season when they beat Cam Celtic 2 – 1 at Dunmore. Gareth Mulligan scored for Cam Celtic midway through the first half. Dunmore won and converted a penalty kick through Declan Forde ten minutes into the second half and with almost the last kick of the game Ben Glynn scored the winner for Dunmore Town.

Ballinasloe Town won their first points of the season when they beat Roscommon United 3 – 1 at Ballinasloe. Petrut Girlamau Dylan Keane and Cameron O Leary gave the home side a 3 – 0 lead early in the game. A much improved performance resulted in the Roscommon side pulling one back through Izidro Ribas but the home side held on to take all three points.

In the only game played in Division 2 St Cuans / Ahascragh United beat Dunmore Town second side 7 – 1 at Ahascragh and go top of the points table. Kenny English scored four, Simon Leonard two and Liam O Connor one for the winners.

In the Women’s senior League Cam Celtic beat Castlerea Celtic in a seven goal thriller at Cam.
The home side started the brighter and Alaine Morris and Grace Hannon gave them a two goal lead. However the visitors were soon level thanks to well taken scores from Shelly Taylor and Rachel Gormley. Rebecca Collins and Sarah O Rourke restored Cam Celtic’s two goal advantage early in the second half. Sarah Diggins pulled a goal back for the visitors with five left to play and they came very close to getting a equaliser near the end.
Kilkerrin United had an impressive 4 – 1 win over Ballinasloe Town at Ballinasloe. Samantha Fahy scored two and Aisling Costello and Aoife Smyth scored one each for the winners. Cassie Finnerty replied for the losers.