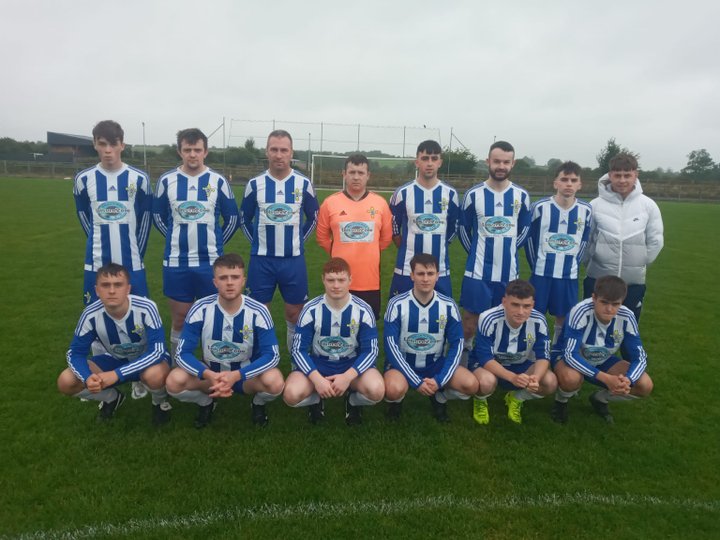 Roscommon and District league Round Up
For the Roscommon and District league the fifth second season of football commenced last Sunday with teams from the Premier and first Divisions in action.
In the Premier Division champions Boyle Celtic had a very easy start to the season when they beat an injury hit Moylough 79 side at Boyle . Michael Corrigan and Louis Garvin scored three each with Shane Carroll Shane Battles Luka Roddy Tadgh Lowe and Richard silence scoring one each for this excellent Boyle Celtic side.

St Johns Athletic continued their recent good run of form with a hard earned 2 – 1 win over Ballaghaderreen at Ballaghaderreen. The home side were the better team in the first half but after that it was pretty close. Eamon Harney gave St Johns Athletic a 1 – 0 lead after fifty six minutes of play and Caimin Boland added a second for his side with seventy five played. Patrick Callaghan pulled a goal back in time added on at the end of the game but it came too late to get Ballaghaderreen back in the game.

Last season’s runners up Ballinasloe Town had a comfortable 7 – 0 win over a very young Skyvalley side at Ballinasloe. David Ward and Josh Mc Carthy scored two each and Mark Duffy Jordan Carr and Kealon Cawley added one each for the winners.

After many seasons away from the Premier Division the Castleplunket side C P Ajax made a winning return when the beat Kilkerrin United 5 – 1 at Tarmon in a game that was much closer than the score line suggest. After ten minutes of play Damien Boyle came close to scoring for the winners but the resultant corner kick from the same player reached his brother Darren and he scored. Kilkerrin United played really well and Conor Moran levelled the game following a Cian Carton cross with fifteen minutes left to play in the first hALF. There was little between the sides for the first twenty minutes of the second half but ate addition of a few subs made all the difference for the home side. Damien Boyle scored three really well taken goals and Darren Boyle added a fifth to secure all three points for the CP Ajax side.

Castlerea Celtic were beaten 7 – 3 at home by a good Moore United side. The winners were 3 – 1 ahead at half time and stretched their lead after the break. Charles Nevin scored four and Andy Hussey Ian Harney and Andy Nevin added one each. Ronan Curran scored two and Peter Farrell one for the losers.

Ballymoe F C started life in division 1 with a hard earned 3 – 1 win over Dunmore Town at Ballymoe . The visitors took an early but Dean Muldoon levelled the game half way through the first half. Dan Malone gave Ballymoe a 2 – 1 lead early in the second half and James Connaughton for Ballymoe converted a penalty kick following a hand ball to make sure of all three points.

Ballinagare / Manor United nearly won promotion to the Premier Division last season and they started this season with a convincing 6 – 1 win over Roscommon United at Ballinagare.
The ever reliable Tom Ward scored three and the even more reliable Gerry Ward added two more with Aaron Dowd completing the scoring. Jay Donlon replied for the losers.
Cam Celtic and Cloonfad United were involved in a real battle at Brideswell with the game finishing 2 – 2 after a late rally by Cloonfad United. The first half was even with Cloonfad United creating the better chances in the continuous rain but man of the match Gary Reynolds in the Cam goals kept them at bay. Cam started the second half much stronger and and twolong throws by by the excellent Diarmuid Colgan resulted in Robbie Fallon netting twice from close range. With both teams getting tired and Cam Celtic trying to protect their lead Cloonfad took full advantage and Conor Flynn pulled one back with seventy one played and brother Darragh Flynn scored the equaliser two minutes into stoppage time at the end of the game.

Last seasons Division 1 winners Ballinasloe were beaten 5 – 4 by Dysart in a thriller at Ballinasloe. Despite the bad weather the game started at a fast pace and both teams played good football. Dysart broke the deadlock when Captain Fantastic James Corbett won the ball in mid field and his one two with his brother Niall before rounding the home keeper and scoring. Dysart had two goals ruled out for off side before Dylan Keane levelled the game when he scored for Ballinasloe with thirty played . The home side conceded a penalty kick five minutes later and Niall Corbett converted. Six minutes before the break good work from John Why Conor Dolan and Niall Corbett created an opening for James Kelly to head a third. Almost on the stroke of half time Debutant James Goose made it 4 -1 for Dysart after good work by Conor Dolan ad Peter Cummins,
A much improved performance from Ballinasloe Town in the second half saw them pull a goal back through Dylan Kane fifteen minutes into the half and they added their third ten minutes later thanks to Colm O Brien. James Goose added his second for Dysart a few minutes later. The home side made it 5 – 4 with five left to play thanks to Petrut Girlamau but good defensive play by Sean Hayes Daniel Kelly and Kyle Kelly the visitors held out to take all three points.