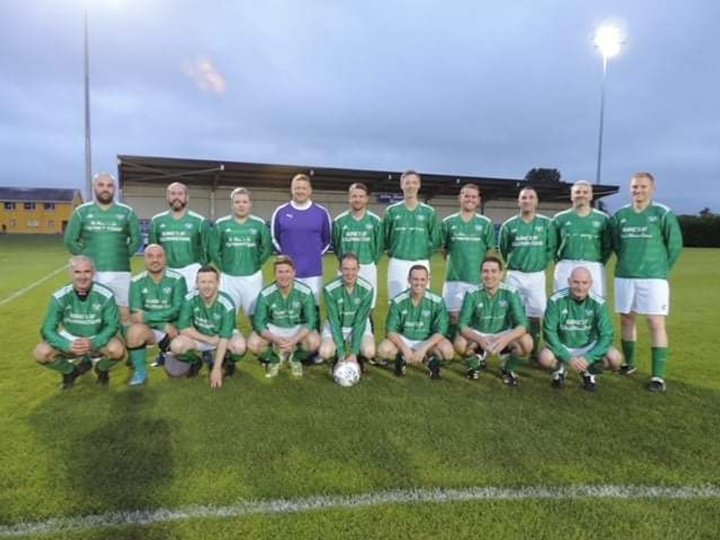 Full round up by Vincent Brooks

Roscommon and District League Round Up

Some of the fist round games in the FAI Centenary Cup were played on Sunday. In an all Premier Division clash at Moylough Cloonfad advanced to the second round after a fine defensive display against a talented Moylough side. Shane Fagan scored what turned out to be the winner for Cloonfad United after only three minutes of play and they held on to win the game.

Division 1 side Dunmore Town beat the Sligo side St Johns Senior Mens FC at Dunmore on a 2 – 1 scoreline. Patrick Cosgrove scored both goals for the winners.
All games away to Sligo sides were postponed due to a problem at the Sligo end.

With teams involved in the FAI Junior Cup the only fixture in the Premier Division of the Roscommon and District League featured Balaghaderreen and Kilkerrin United at Kilkerrin. Ballaghaderreen had a hard earned 2 – 1 win over the Kilkerrin side and the three points keeps them very much in the title race. Ballaghadeereen were much the better side in the first half but a rejuvinated Kilkerrin United were much better in the second half and only some excellent defending secured all three points for Ballaghaderreen. Kilkerrin United took the lead fifteen minutes into the second half through Brian Mc Dermott but within two minutes Paddy Regan headed the ball to Danny Browne and he levelled the game. Six minutes later Ballaghaderreen scored what turned out to be the winner when a Danny Browne free kick was glanced over the keeper by Rory Callaghan.

Ballinasloe Town continued their winning run in Division 1 when they beat Dysart 3 – 0 at Dysart. The game was closer than the scoreline suggests with the Ballinasloe keeper Padraig Maloney making some excellent saves including a penalty save near the end. Conor Kenny gave them the lead with Colm O Brien adding two more before the end.

Skyvalley Rovers threw away a 4 – 0 lead to loose 5 – 4 at home to the Castleplunket side C P Ajax.
If ever there was a game of two halves this was it. Skyvalley Rovers started well and were 2 – 0 up after fifteen minutes. The home side kept the pressue on and were 4 – 0 up with five minutes left to play in the first half. C P Ajax received a life line just before the break when they pulled a goal back . They made three changes at the break and were much better in the second half. The home side conceeded three goals in the first twenty five minutes of the second half and with time running out C. P scored the winner. Paul Mc Manus scored two and Jack Moore and Sean Ryan added one each for the home side. Damien Boyle scored two and Daniel Connolly Ryan Larkin and an own goal made up the remainder for C P Ajax

Shiven Rovers had an impressive 5 – 2 win over Roscommon United at Roscommon. The home side took the lead when Jamie Bracken finished well following a mix up in the Shiven defence.Shiven improved as the game went on and Frai Chiza levelled the game just before half time. With five played in the second half Shiven won a penalty kick and Francis Kilcommins scored from the spot.With sixty played Paraic Delaney added a third with the help of a wicked deflection and Jason Murware and Seamie Kelly added two more before Jamie Bracken converted a penalty kick for the losers.

In Division 2 Boyle Celtic and Skyvalley Rovers share the lead but there is a long way to go in this division.
Boyle Celtic beat beat Dunmore Town 1- 0 at Boyle. Declan Morris scored the only goal of the game in the first half.

A mainly young Skyvalley Rovers side beat St Johns Athletic 3 – 0 at Onagh park Taughmaconnell.
The teams were pretty well matched in the first half but the home side made a couple of changes at half time and they were much better after that. John Moore and Mooney Faunas played particularly well and tested the St Johns Defence. Conal Moore opened the scoring for the winners with sixty seven played and Dennis Bradley and Mooney Faunas added two more inside the next fifteen minutes to secure the win.

Table toppers Cam Celtic suffered their second defeat in a row when visitors Cloonfad United and themselves played a veryentertaining and close game in front of a large crowd at Cam. The home side missed two or three good chance to take the lead and paid the price when an excellent chip from Nigel Prendergast in the closing stages of the game won all three points for Cloonfad United.

Ballaghaderreen and Rahara Rovers were involved in a six goal thriller at Ballaghaderreen. The home side were 2 – 1 up at the interval but had to come from behind to snatch an equaliser near the end. Rory Callaghan scored two and Cian Mc Cann one for the home side while
Saemus Lynch Dylan Donnelly and Liam Naughton scored for Rahara Rovers.

St Cuans/Ahascragh United beat Roscommon United 5 – 2 at Ahascragh. Lee Johnstone and an own goal gave the winners a 2 – 0 lead with Leonardo pulling a goal back for the visitors before half time. Liam O Connor Owen Gavin and Colin Concannor scored for the winners in the second half with Aaron Langan converting a penalty for the losers

The Masters Shield final between Colemanstown and Skyvalley Rovers provided a thrilling game at Lecarrow with the outcome very much in the balance until the last kick of the game. It was a great example of sportmanship between two good sides with not even one dirty takle in the game. Eventually the game was decided by a last miute score from the Colemans player Kenneth Duane.
Colemanstown were very inpressive early in the game and Paul O Connor gave them a deserved lead after nine minutes of play. Skyvalley Rovers gradually came into the game and were slightly the better side for the remainder of the game.Kenneth Kenny headed an equaliser after eighteen minutes of play. Brian Croffey Pat Muleady and Kenneth Kenny all came close to scoring for Skyvalley Rovers but with just a minute remaining a fine cross come shot by Kenneth Duane evaded everyone before nesting in the corner of the Skyvalley Rovers net.