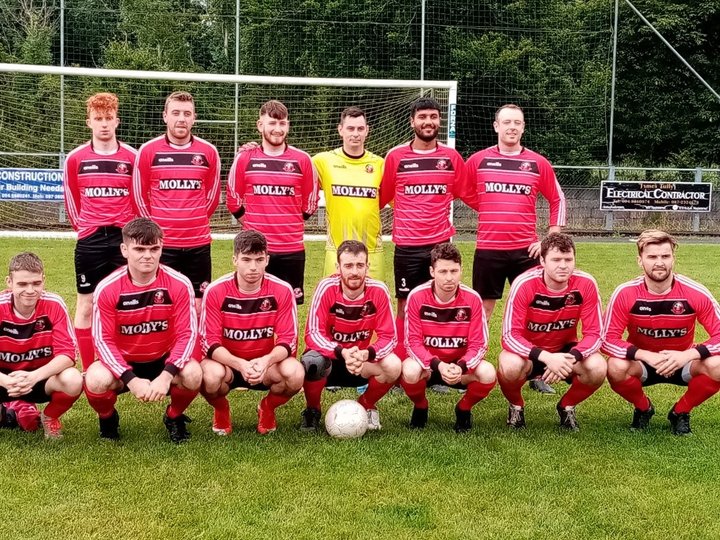 Roscommon and District League Round Up by Vincent Brookes.

Moore United continued their good run of results this season when they beat St Johns Athletic 3 – 1 at Moore in their Premier Division game.. An excellent volley from Tommy Hurley gave St Johns Athletic a 1 – 0 lead with just eight minutes played. Moore showed more urgency in the second half and were level within three minutes of the restart. Charles Nevin nd Rian Carpenter combined with Nevin shooting to the right corner of the visitors goal. Within seven minutes Moore were in front. A perfect cross by Jason Ryan left Andy Nevin with a simple header at the back post. The Lecarrow side pushed forward for an equaliser but were caught out when a long clearance from Paddy Reilly reached Mark Gannon and he made sure of the three points when he scored with five minutes remaining.

Ballaghaderreen (pictured) picked up their first three points of the season when they beat Cloonfad United 3 – 1 at Ballaghaderreen. Cormack Costello gave Cloonfad a 1 – 0 lead after twenty minutes and Danny Browne converted a free kick to level the game five minutes before the break. Usama Israr volleyed in a second for the winners and Cormack Rushe showed he never lost his touch when he added a third for the winners near the end

In Division 1 Dunmore Town Dunmore Town beat Dysart 3 – 2 at Dunmore. Gavin Mullarkey broke the deadlock after eight minutes of play and Tom Byrne added a second on the half hour mark. Ethan Coen added a third for the winners with fifty seven played. Dysart never gave up and Andy Lawlor and James Coyne pulled two back in the last fifteen minutes and they had a claim for a penalty turned down in the closing minutes.

Ballinasloe Town were 5 – 2 winners over Shiven Rovers at Ballinasloe. Michael Doyle scored in each half for the Newbridge side.

The Castleplunket side C P Ajax beat a young Glen Celtic side 6 – 1 at Tarmon. Thomas Keane scored three, Darren Boyle two and Thomas Callaghan one for the winners. Ryan Mc Hugh scored for the Glenamaddy side.

Ballinagare / Manor United beat Skyvalley Rovers 3 – 2 at Ballinagare. Skyvalley Rovers dominated the first twenty five minutes of the game and Callum O Brien scored after fifteen. However Michael Ward chipped the keeper after thirty five to level the game. The home side were on top in the second half and Jack Mc Dermott gave them the lead after seventy minutes. However the visitors levelled the game through David Grehan with twenty to play but Michael Ward scored the winner with six minutes remaining.

Cloonfad United beat Rahara Rovers 2 – 1 at Cloonfad. The home side were ahead at half time thanks to an own goal. Seamus Lynch levelled the game when he scored for Rahara after sixty four minutes but with twelve left to play Jack Reinhardt scored the winner for Cloonfad.

Dunmore Town and Moore United drew 1 – 1 at Dunmore. Shane Davis for the home side and James Byrne for Moore United scored the goals.