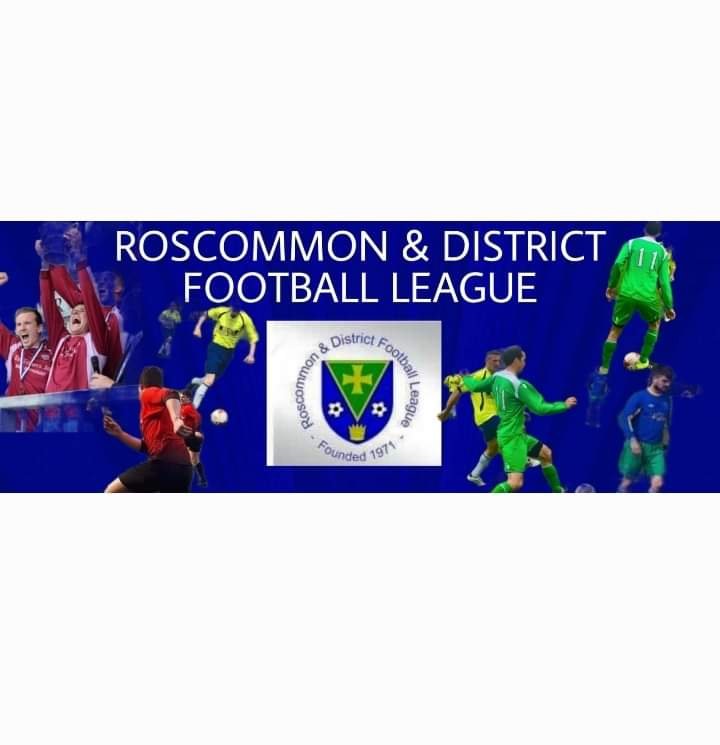 Roscommon and District League Round up
Boyle Celtic hold on to top spot in the Premier Division following an important 4 – 1 win over Ballinasloe Town at Ballinasloe. Darren Foley gave the defending champions Boyle Celtic a 1 – 0 lead early in the game but Ballinasloe Town were level shortly afterwards thanks to a Josh Mc Carthy strike.. Callum Andrews restored the Boyle Celtic lead before half time and the same player added a second with sixty nine played. Any hopes of a Ballinasloe Town come back were dashed when Shane Battles added a fourth for the winners.

Moore United are in second place, three points behind the leaders with a game less played. They had an important 2 – 0 win over a St Johns Athletic side that had a real chance of catching the leaders. Overall it was a really close game with St Johns Athletic on top in the first half. Moore missed a good chance to take the lead before half time but the losers missed an even better chance early in the second half.
With man of the match Jack Nevin in top form the Divisions top goal scorer Charles Nevin scored twice on the break in the last twenty minutes of the game to seal three valuable points for Moore United..

In the Local Derby game at Lecarrow Castlerea Celtic snatched a late equaliser against the Castleplunket side C P Ajax. This was a real thriller with both teams feeling they should have taken all three points from a game that finished 3 – 3. Castlerea Celtic were the better side I the first half and took a deserved lead after fifteen minutes when Darren Clabby finished off a Jack Higgins cross. C P Ajax were level early in the second half when Ryan Larkin and Darren Boyle combined and Paul Mee scored from close range.
Michael Conroy headed a very good goal for Castlerea Celtic before Paul Larkin and Daniel Connolly made it 3 – 2 for the Castleplunket side. With the game nearly over Jonathan Hester created an opening for Oisin O Farrell who got the equaliser for Castlerea Celtic

Shiven Rovers stretched their lead at the top of the Division 1 points table to six points over second placed Cam Celtic following a 3 – 1 win over Cam Celtic at Cam. Joey Horan converted a penalty kick for the winners with only three minutes played and the same player latched on to a ball over the top from Adam Farrell after thirty minutes to give Shiven Rovers a 2- 0 lead. Cam Celtic pulled a goal back from a corner kick almost on the stroke of half time. Both teams had chances to score before Adam Farrell scored a third for the winners with an excellent free kick with twenty left to play.

Cloonfad United beat Roscommon United 4 – 0 in a game that was closer than the score suggested. With the game scoreless Roscommon United missed two great chances to take the lead and also hit the post before Conor Flynn scored for the home side with thirty three played. Shane Fagan and Darren Keadin added two more before the break and Darragh Flynn added their fourth with sixty two played.
Ballinagare / Manor United had a hard earned 3 -0 win over Ballymoe at Ballymoe and while eight points behind the leaders they have a game in hand. Aidan Dowd headed a Diarmuid Boylan free kick to the Ballymoe net with thirty played. With fifty eight played Tom Ward created a chance for Vando who added a second and John Stokes sealed the win when he got a third with ten left to play

In Division 2 Glen Celtic and St Cuans / Ahascragh Utd drew 0 -0 at Glenamaddy.
Rahara Rovers beat Skyvalley Rovers 4 -2 at Onagh Park Taughmaconnell. All six goals coming in the first half The winners scored three through the Divisions leading goal scorer Jamie Tiernan before Jack Downey pulled one back for the losers Jack Naughton sealed a win for Rahara when he add3d their fourth with Thomas Carey scoring a second for the losers.
In the Women’s League Shiven Rovers senior ladies team beat league leaders Cam Celtic 4 – 2 in a well contested game at Killyan on Saturday night. Playing with the wind in the first half Cam took the lead after twenty minutes through Sarah O Rourke. With thirty five played a volley from Lucy Dunican was handled by a Cam defender who was sent off and Lucy converted the penalty kick. Just before half time Emer Kelly restored the Cam lead but ten minutes into the second half Rachel Farrell levelled the game. Muirne Kilcommins and Lucy Dunnican added two more for Shiven Rovers before the end
Kilkerrin Utd and Castlerea Celtic drew 2 – 2 in their game at Kilkerrin. Shelly Taylor with a great header and a cool finish from Sarah Diggins for Castlerea Celtic and Aoife Smyth and an own goal made up the Kilkerrin total
Ballaghaderreen beat Ballinasloe Town 3 – 0 in a good game of football at Ballaghaderreen. The home side scored all three goals in the first half. Rebecca Finan scored two and Jessica Feeny one for the winners.
In the first ever game in reserve league Ballinagare Manor Utd. beat Cloonfad United 5 – 1 at Ballinagare. Jack Mc Dermott scored two and Gerry Ward Cian Galvin and Christy Dineen scored got the winners with Daniel Fagan replying for the losers,