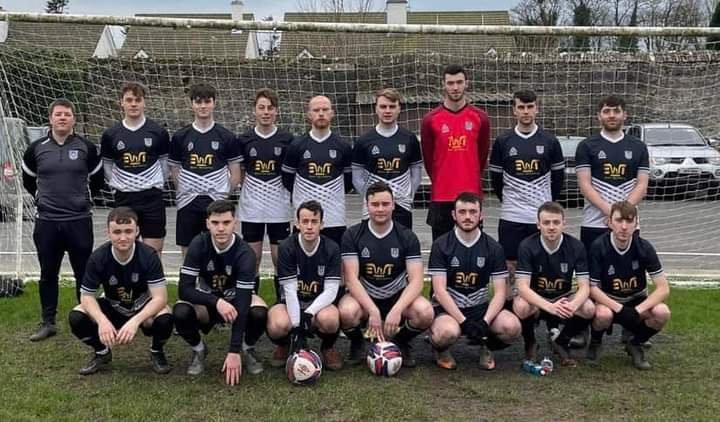 Premier Division side Ballymoe F C pulled off a stunning 4 – 0 win over the Mayo Super League side Ballina Town at Ballina. The home side are the second best side in the Mayo League and started clear favourites. However Ballymoe had other ideas and with their keeper Jack Donnellan in sparkling form they never looked like losing. James Connaughton headed an Adrian Collins Corner kick to the Ballina net with twenty two played and Daniel Malone added a second with a twenty meter chip over the keeper with sixty three played. Damien Goggins finished off a neat pass from Daniel Malone with sixty seven played and the same player added his second six minutes later thanks to a well struck free kick.

Boyle Celtic went all the way to a penalty shoot-out before overcoming a good St Bernard’s side from Abbeyknockmoy at Boyle.
Shane Battles gave Boyle an early lead but the visitors were soon level. Fintan Cregg restored the Boyle Celtic lead but St Bernard’s fought back to level the game with just three minutes remaining in normal time. Both teams failed to score in extra time and the game then went to a penalty shoot-out. The Boyle keeper Sean Conlon pulled off three saves and Callum Andrews and Dessie Carlos scored from the spot to give Boyle Celtic 2 – 0 win and a place in the last sixteen of this competition. 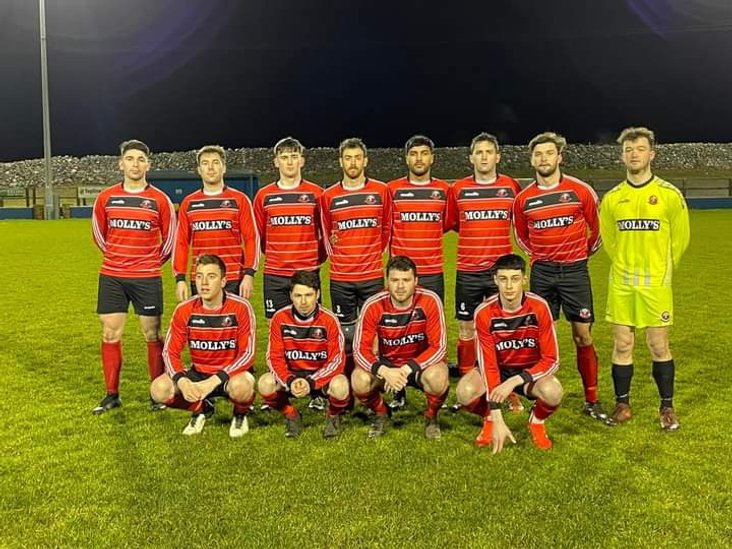 Ballinasloe Town had an impressive 8 – 2 win over the Mayo Premier side Fahy Rovers at Ballinasloe. An experienced Ballinasloe Town side were always in control and were 5 – 1 up at half time. Liam Lynch scored two and Mark Duffy Josh Mc Carthy Aidan Dooney Garry Egan Jordan O Leary and Cameron O Leary added one each.
Premier Division side Kilkerrin United were surprisingly beaten 2- 1 when they played the Galway League side Dynamo Blues at Tuam. The home side went 1- 0 up after twenty minutes through Kevin Stankard. Cillian Halvey levelled the game when he scored for Kilkerrin eleven minutes late. Dynamo Blues Christian Ryan converted a penalty Kick for hand ball with sixty played and his side defended well for the remainder of the game.

In the Connacht Shield- Division 1 side Dunmore Town beat the Mayo League side Partry Athletic 2 -1 at Dunmore. While Dunmore were the better side in the first half they had to wait until five minutes into the second half when Shane Davis scored for them. Partry were level within five minutes but Dunmore Town won a penalty kick after seventy minutes and Gavin Mullarkey scored the winner from the penalty spot

Division 1 side Shiven Rovers had an impressive 4 – 1 win over the Sligo/Leitrim League side Ballygawley Celtic at Newbridge and they are also through to the last eight of this Connacht competition. Tom Doyle headed a corner kick to the Ballygawley net and Keith Murphy added a second before half time. Adam Farrell and Keith Murphy added two more for Shiven Rovers in the first twenty minutes of the second half with the visitors getting a consolation score near the end of the game.

In the Norio’s Premier Division of the Roscommon and District League Ballaghaderreen and Moore United drew 2 – 2 at the League Grounds Lecarrow. Paddy Callaghan gave Ballaghaderreen a 1- 0 lead with twenty one played and he added a second with fifty played. However Moore struck back and were level within five minutes. A deflected free kick gave them their first and Charles Nevin added their second. Both teams had chances in the closing stages but despite having a player sent off Ballaghaderreen held on for a deserved point.
In the only game played in Division 2 Ballaghaderreen and Skyvalley Rovers drew 3 – 3 at Ballaghaderreen. Chris Dunne gave the home side an early lead and David Grehan levelled the game when he scored before half time. Chris Dunne completed his hat trick for the home side early in the second half but two late goals from David Grehan and Shane Downey won a point for Skyvalley Rovers..